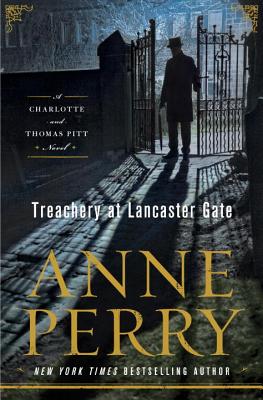 Gripping and provocative, the latest Thomas and Charlotte Pitt mystery by New York Times bestselling author Anne Perry peers unflinchingly into the corrupt affairs of Victorian society on the brink of the century's turn. The world is poised for social and political change, but England holds tight to its traditions, classes, and prejudices.

When an explosion in London kills two policemen and seriously injures three more, many believe that anarchists are the culprits. But Thomas Pitt, commander of Special Branch, knows the city's radical groups well enough to suspect that someone with decidedly more personal motives lit the deadly fuse. As he investigates the source of the fatal blast, Pitt is stunned to discover that the bombing was a calculated strike against the ranks of law enforcement.

But still more shocking revelations await, as Pitt's inquiries lead him to a member of Parliament hoping for a lucrative business deal, a high-ranking police officer with secrets to keep, and an aristocratic opium addict seeking murderous revenge. As he pursues each increasingly threatening lead, Pitt finds himself impeded at every turn by the barriers put in place to protect the rich and powerful -- barriers that, as they start to crumble, threaten to bury him alive.
Reviews from Goodreads.com

Needless to say, I am a huge fan of Anne Perry and both of her mystery series set in Victorian England. This is the 31 book in this particular series, and it's totally amazing how she manages to bring a new, interesting and exciting mystery with each new book. In this book Thomas and his former constable Telford are dealing with what at first appears to be a bomb set by anarchists that killed three and badly injured two policemen. As Telford and Pitt investigate, they find a mystery that ties back to a two-year old murder case that had apparently been solved and the perpetrator has been executed. As they dig deeper, they find something much more sinister and deadly and it becomes apparent that there is major police corruption behind the incident. Ms. Perry has exposed the dark underbelly of the Victorian aristocratic class again. And she does it so cleverly and so believably that it's just like reading about one of our modern problems - only with gaslights and horses and carriages. Again, I reiterate, she is by far my favourite author, and has been for many years.