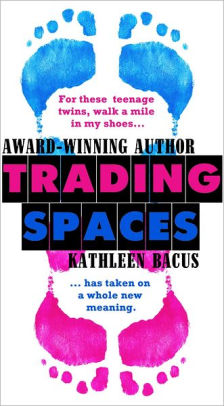 Jonas Kragen and his twin sister, Jillian, have been going at it since before they were born: launching fierce kick-boxing matches in their mother’s womb, turning walkers into bumper cars, grade school recesses into blood sport, and puberty into pistols at ten paces.

Jillian thinks Jonas is Exhibit ‘A’ in the case for man’s evolution from the ape and what brains he has are all in his biceps. Jonas is convinced his sister is a shallow little drama queen with a gift for getting under his skin.

Fourteen and still feuding, this dueling duo is in for a rude awakening when they undergo a shocker of a switcharoo and discover they’ve inexplicably changed places! Jonas is suddenly sporting toe rings, and wearing gunky mascara and candy apple red nail polish. Jillian’s got Jonas’s hairy legs, humongous feet, and tidy whities.

And Jonas wants them back!

With cheerleading tryouts and the big football scrimmage coming up, these traumatized twins must find a way to peacefully coexist long enough to figure out how to reverse the surreal swap before someone discovers they’ve traded spaces.

It’s a battle of the sexes, sibling-style, where Freaky Friday is child’s play and “walk a mile in my shoes” takes on a whole new meaning.

How do you say “gender gap”?
Reviews from Goodreads.com