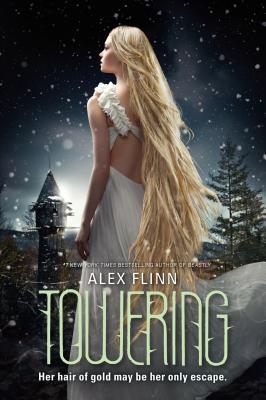 In a town full of secrets, one girl is trapped in a tower and her golden hair may be her only escape. From #1 New York Times bestselling author Alex Flinn comes a retelling of Rapunzel like you've never read before!

Rachel is trapped in a tower, held hostage by a woman she's always called Mama. Her golden hair is growing rapidly, and to pass the time, she watches the snow fall and sings songs from her childhood, hoping someone, anyone, will hear her.

Wyatt needs time to reflect or, better yet, forget about what happened to his best friend, Tyler. That's why he's been shipped off to the Adirondacks in the dead of winter to live with the oldest lady in town. Either that, or no one he knows ever wants to see him again.

Dani disappeared seventeen years ago without a trace, but she left behind a journal that's never been read, not even by her overbearing mother…until now.

A #1 New York Times bestselling author, Alex Flinn knows her fairy tales, and Towering is her most mind-bending interpretation yet. Dark and mysterious, this reimagining of Rapunzel will have readers on the edge of their seats wondering where Alex will take them next!
Reviews from Goodreads.com