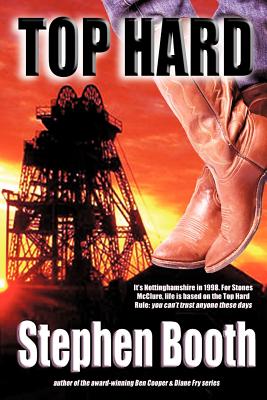 As he watches criminals target a French lorry in a layby, Stones McClure thinks his plans might actually come together for once. He's looking forward to a life full of everything he could possibly want - money, cars, a pair of fancy cowboy boots. But things aren't always what they seem. And Stones should know it better than anyone.

It's Nottinghamshire, England, in 1998. Derelict pits, decaying villages, rundown housing estates - all surrounded by vast, historic mansions in country parks known as the Dukeries. And there's no sign of Robin Hood to spread a bit of the wealth around.

In a world full of injustice, among people still haunted by memories of the Miners' Strike, Stones is a man trying to put his old life behind him for good. But survival in this part of the world depends on the Top Hard Rule - you can't trust anyone these days.

Now it's all about to go very wrong for Stones McClure. Someone is definitely out to get him. And most surprising of all, it isn't one of the women in his life...

Told in a unique voice, with a cast of extraordinary characters, 'Top Hard' is an irreverent crime story set in a memorable time and place. In 1998, it was a finalist for the Crime Writers' Association's New Writing (Debut Dagger) Award.

Stephen Booth is the multiple award-winning author of the Ben Cooper and Diane Fry series.

"One of our best story tellers" - Sunday Telegraph

"One of the elite British mystery writers" - Washington Times

"There are few, if any, contemporary writers who do this as well as Stephen Booth" - Arena Magazine