To Whisper Her Name — Tamera Alexander 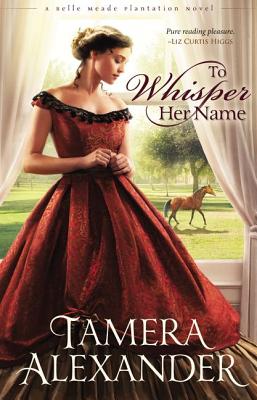 Share:
Olivia Aberdeen, destitute widow of a man shot as a traitor to the South, is shunned by proper society and gratefully accepts an invitation from "Aunt" Elizabeth Harding, mistress of Belle Meade Plantation. Expecting to be the Harding's head housekeeper, Olivia is disillusioned when she learns the real reason Elizabeth's husband, Confederate General William Giles Harding, agreed to her coming. Not finding the safe haven she expects, Olivia is caught off guard by her feelings for Ridley Adam Cooper, a Southern man who seems anything but a Southern gentleman.

Branded a traitor by some, Ridley Cooper, a Southern son who chose to fight for the Union, is a man desperate to end the war still raging inside him. Determined to learn "the gift" that Belle Meade's head horse trainer and former slave, Bob Green, possesses, Ridley harbors secrets that threaten both their lives.

As Ridley seeks to make peace within himself for "betraying" the South he loved, Olivia is determined to never be betrayed again.

Set at Nashville's historic Belle Meade Plantation, the most influential thoroughbred stud farm in America's history, To Whisper Her Name weaves the struggles of real people of the post-war South with the journeys of a man and a woman scarred by betrayal.