To Home and Ehvenor — Joel Rosenberg 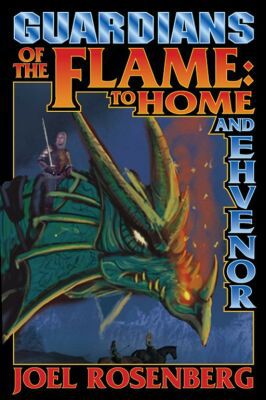 IT WAS SUPPOSED TO BE JUST
A ROLE-PLAYING GAME . . .

Professor Deighton smiled from around the stem of his pipe. "You have a vague, unexplainable feeling that what you are looking for is something called the Gate Between Worlds."

"... although we all share a vague suspicion that we're looking for the Gate Between Worlds, whatever that is. Would you care to join us?"

"Sure. Un--what are you going to do about those boxes on the hillside?"

Doria's voice was almost a whine. "Open them, silly."

"As the first box is opened," Deighton said, "You are overwhelmed by a rush of--"

James Michael couldn't hear the rest; a rush of sound like that of an impossibly loud, impossibly near jet buffeted his ears, acrid smoke clawing at his eyes and nostrils until he found himself tumbling out of his wheelchair and falling to his knees in a coughing spasm, his tearing eyes clenched shut.

He bounced to his feet on the damp grass, reflexively reaching for the axe strapped to his chest, loosening the straps with two quick jerks and taking the axe in his gnarled, well-muscled hands.

He opened his eyes.

He was a dwarf standing on the side of a grassy hill, with an axe in his hands.

AND THAT WAS ONLY THE BEGINNING . . .
Reviews from Goodreads.com