To Be a Spy — Jessie Clever 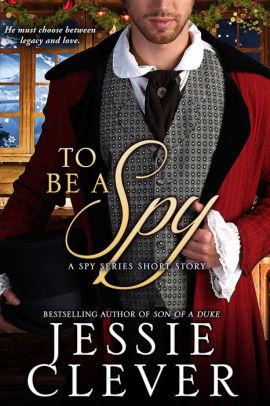 Share:
From Book 1: The last thing Eleanora Quinton expects when the dead body hits the floor is love with the son of a duke.

As society’s most capable housekeeper, Eleanora has conquered any number of social disasters. But when a dead body falls right into the middle of her mistress’s ball and her son gets kidnapped, the only person who can help her also forces her to face her most crippling fears.

A spy for the British War Office and illegitimate son of a duke, Nathan Black pulls the infallible housekeeper into a cyclone of espionage, intrigue and danger as he searches for the meaning behind her son’s kidnapping. Fighting to keep Eleanora safe, Nathan struggles with his growing attraction to her, but as the treasonous plot twists around them, too many clues point to Eleanora and a past of which she will not speak.

Can their love withstand her dangerous secret?

Son of a Duke is the first book in the fast-paced, thrilling, historical romance Spy Series. If you love steamy romance, heart-stopping adventure, and unforgettable passion, don’t miss this captivating series from bestselling author Jessie Clever. Unlock romance and adventure when you pick up your copy of Son of a Duke today.