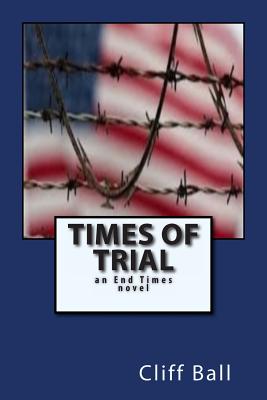 Book 3 in The End Times Saga, a Christian Fiction series

This novel is a parallel novel to Times of Trouble.

Three Christian families suffer from persecution as the President declares himself dictator, implements something called Order 21, and begins targeting his political and spiritual enemies. Meanwhile, tensions between Israel and Iran intensifies as the End Times approach.

Times of Turmoil - Book 1
The Evans family sets out to destroy Christian influence in the U.S.

Times of Trouble - Book 2
The Atwood family watch as the U.S. begins to fall apart around them as the End Times approach.

Times of Trial - Book 3
When the President declares a dictatorship, he begins the immediate persecution of Christians shortly before the End Times.

Jon Ryan: An End Times Short Story
Jon Ryan has to deal with the government interfering in healthcare shortly before the End Times approach.

Xavier Doolittle: An End Times Short Story
Xavier, another character from Times of Trouble, goes to work for the federal government and completely abandons his Christian faith, until he meets Brian Atwood.

Times of Rebellion - Book 4
A Christian young man becomes famous and rebels against everything he's been taught before the end times.

Times of Destruction - Book 5
In the first 3 1/2 years of the Tribulation, the new leader of the world has to deal with his new global economic system, Biblical sized disasters, and two Jewish witnesses who annoy the world's citizens.