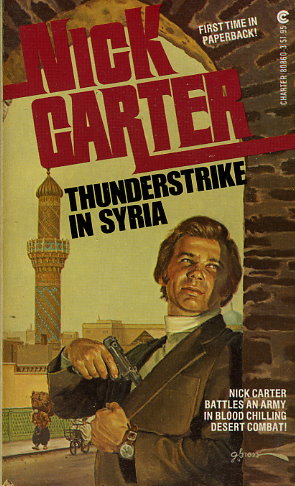 DEATH IN THE DESERT!

The Syrian Liberation Army, a fanatical group driven by "The Hawk," are expanding their activities -- if they succeed a tanker will explode in New York Harbor wasting a million lives! And that'll be just the beginning!

Nick Carter enlists double agent Miriam Kamel to lead him to the terrorists' desert camp under the spectacular ruins of The Tower of Lions. Miriam's an expert in the arts of love and war -- but Nick wonders if she's as clever at deceit. . . .

Under the chilling desert moon, amid the dying cries of "The Hawk's" torture victims, Nick is trapped in a nerve shattering battle. His Israeli friends call him Lamedvovnik -- the secret saint. But as time runs short N-3 could quickly become another kind of "saint" -- a very dead martyr!
Reviews from Goodreads.com