Through Her Eyes — Delilah Devlin 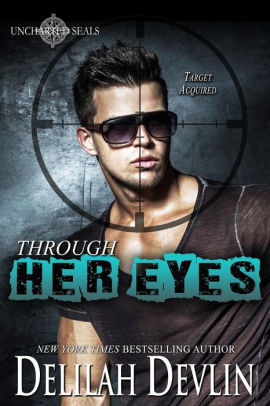 
Ex-SEAL and expert sniper, Wolf Kinkaid, is taking a little downtime while he considers his options. Being wooed by two elite spec ops groups, he’s enjoying Charter Group’s beach house in Cancun while he considers his options. A loner by nature and occupation, he wonders if he’ll ever really be able to connect to people around him. Afraid his loner nature will sentence him to spending his life alone, he’s not even sure he wants to continue looking down a scope, even if the pay’s good.

Bounty hunter Piper Ames loves the adrenaline rush she gets from her high-stakes hunts, but, now, she has time on her hands as she waits for her collar to pop up his head, so she can take him down. While she’s waiting, it doesn’t hurt that a big, buff, ex-military type is staying right next door. Not the least shy about going after what she wants, she’s surprised when he’s equally as aggressive. Their chemistry is off the charts, and the sex is the hottest she’s ever had.

While Wolf and Piper connect in the only ways their independent natures allow, danger lurks. When, at last, her target arrives, guns blazing, Wolf and Piper have to pull together to make it out alive.