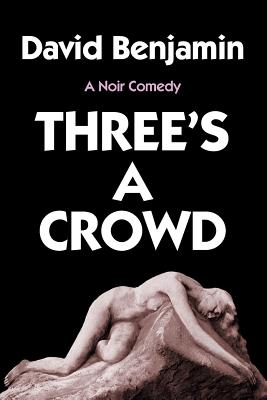 Moments after each of three conventional, middle-class American men has murdered his wife in a different part of the city, Rudy, Bud and Chip, rendezvous at the legendary Paris café, La Coupole, to celebrate their liberation and re-live the thrill of homicide.Rudy and Bud are first to arrive at La Coupole. While they await Chip’s return from the scene of his wife’s death, the narrative of the novel, Three’s a Crowd, scrolls back in time, to unravel the history of this triple killing.It all began, in kidding and speculation, in Las Vegas—where the three murderers, ordinary citizens of their booming industry, meet annually at the Consumer Electronics Show (CES). Because the three plotters see one another only at CES, for five days in January, the murder plot takes years to develop. The catalyst who turns impulse into action is Chip, a latecomer to the trio. Chip is the “eager beaver” who brings to the party the energy and practical wherewithal to turn the violent death of three unsuspecting wives from a pipe dream to a real-life capital crime.The reasons that wives Whitney, Donna and Judy must die unravel in flashbacks to several Las Vegas locales, including the Las Vegas Convention Center and a North Vegas “gentlemen’s club” called the Tough Titty Lounge. In annual pilgrimages to the Tough Titty, Rudy, Bud and Chip experience an almost religious epiphany. The ministrations of young ladies named Shalimar, Simba and Monique—among others—help the three husbands realize the lovelessness and sexual barrenness of their marriages. They come to understand, logically, that their only way out is murder. Back in Paris in the present, Chip arrives at La Coupole hours late, frazzled and disheveled. He assures his co-conspirators that, yes, he has killed Judy. But there’s a complication that will require all three to return to the spot where he gunned her down. Before that, though, he takes nourishment and coaxes his friends into recounting the lurid and grisly details of their crimes—each committed in one of Paris’ most historic and evocative locales. As the story unfolds, the three murderers reveal that, the previous night, as a sort of sendoff, they had thrown a party—with all three couples together for the first time—at a renowned Paris brasserie, Le Grand Colbert. During that festive occasion, the three wives bond, and the plot thickens.It thickens further the next night in a surprising climax when Rudy and Bud follow Chip to the banks of the Seine to help him dispose, once and for all, of Judy’s body.
Reviews from Goodreads.com