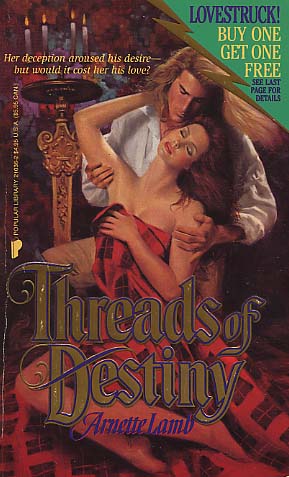 Share:
THE WIND ACROSS THE HEATHER WHISPERED OF THEIR PASSION ... AND WARNED OF THEIR FATE

Lady Suisan Harper couldn't take her eyes from the dangerously attractive man whose presence filled the candle-lit room-Myles Cunningham. She had expected a weakling; he was strong. She had expected cold indifference; he drew her to him with a hot and hungry look. But, of course, he believed she was only Maura, a saucy maid happy to share a wealthy man's bed.

Handsome or not, Myles had nearly driven her family's weaving business to ruin. He had even stolen the patterns for her family's clan tartans, symbols of Scots independence outlawed by the English king. Suisan had come to London willing to risk her honor and her freedom to get them back. But now, as Myles' lips brushed hers with fire, her carefully woven thread of lies began to unravel...and a silken strand of desire bean binding her destiny to this irresistible man-her enemy and her beloved.