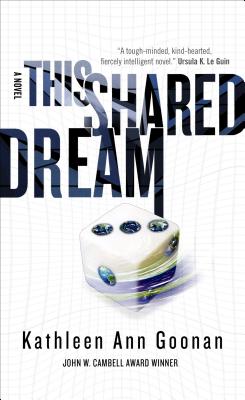 
Kathleen Ann Goonan introduced Sam Dance and his wife, Bette, and their quest to alter our present reality for the better in her novel In War Times (winner of the John W. Campbell Memorial Award for Best Novel and ALA's Best Science Fiction Novel of 2008). Now, in This Shared Dream, she tells the story of the next generation.

The three Dance kids, seemingly abandoned by both parents when they were younger, are now adults and are all disturbed by memories of a reality that existed in place of their world. The older girl, Jill, even remembers the disappearance of their mother while preventing the assassination of John F. Kennedy.

Goonan has created a new kind of utopian SF novel, in which the changes in history have created a present world that is in many ways superior to our own, while in other worlds people strive to prevent their own erasure by restoring the ills to ours. This Shared Dream is certainly the most provocative SF speculation of the year, and perhaps the decade.