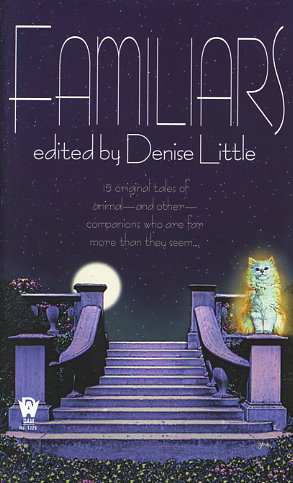 The word familiars immediately evokes images of witches and black cats, but fantasy writers have too much imagination to allow themselves to be confined to such a stereotype, and their minds instantly begin to conjure up stories in which not only cats but dogs, humans, and even insects can become key assistants in the raising and working of arcane powers. In some instances humans are not even the masters to whom these familiars belong.

Here are fifteen original tales by some of the top writers in the field, stories ranging from a humorous look at the role played by the Clintons' cat, Socks, in the troubles that occurred during Bill's administration...to the challenge a minor wizard faces when he seeks a way to save his own cat familiar and stop the mysterious enemy who has been targeting familiars for death...to the desperate battle for survival and justice waged by a warlock and his dog when Cotton Mather targets them for judgment...to the incredible odyssey of a college student who undergoes life regression only to discover that he was not even human in his past life....