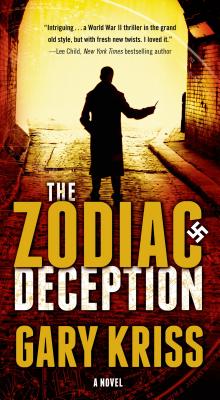 Share:
Summer, 1942: The con man known as David Walker didn't exactly volunteer, but OSS chief Wild Bill Donovan convinced him that serving his country and the cause of freedom by posing as German astrologer Peter Kepler was a better use of his time than going to prison for impersonating a Princeton University professor. His mission: use his skills in illusion, sleight of hand and deception to gain Heinrich Himmler's trust and persuade him to assassinate Adolph Hitler.

In a plot that involves German resistance members in high places, Walker walks a tightrope of deceit, playing on the high command's fascination with the occult to penetrate the highest levels of Nazi power in a daring plan to eliminate the Nazi Führer.

In action that takes him from Berlin to Paris to Cairo; from Hitler's Eagle Nest to Himmler's occult Wewelsburg Castle, Gary Kriss's The Zodiac Deception is a memorable debut, an unforgettable thrill ride through the dark heart of World War II Germany.