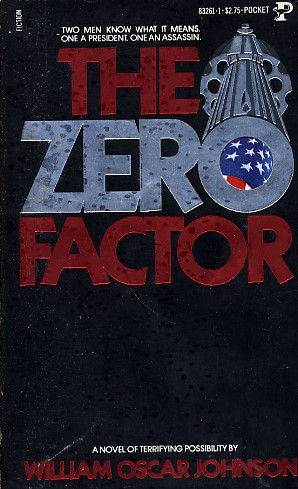 Share:
1980: America elects Gus York to the Presidency and makes him the target of The Zero Factor

The Zero Factor:
To the Cuban expatriates it was coincidental to their plan--a plan for political murder of global consequence and a vengeance plot with a $10,000,000 price tag.

The Zero Factor:
To Le Bombardier, a cool, precise assassin, it was a trivial amusement, as removed from the act as a bullet from its prey.

The Zero Factor:
To Augustus York, a decent, honest man in a ruthless, expedient world, it was a death sentence. Twice already he had escaped it. But he was still out there somewhere, counting out the fatal ticks on an unseen, unstoppable clock, ready to claim the eighth victim of .. .THE ZERO FACTOR