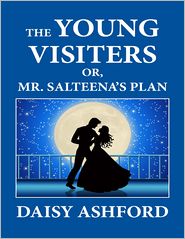 Share:
Mr Salteena was an elderly man of 42 and was fond of asking peaple to stay with him. He had quite a young girl staying with him of 17 named Ethel Monticue. Mr Salteena had dark short hair and mustache and wiskers which were very black and twisty. He was middle sized and he had very pale blue eyes. He had a pale brown suit but on Sundays he had a black one and he had a topper every day as he thorght it more becoming. Ethel Monticue had fair hair done on the top and blue eyes. She had a blue velvit frock which had grown rarther short in the sleeves. She had a black straw hat and kid gloves.