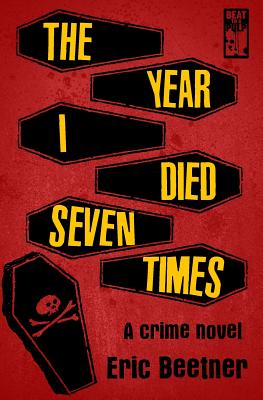 Deaths = 7 Body count = 1
Well, okay, there were more bodies than that once the year was over. But for me, I wasn't going to let a little thing like death stop me from finding out what happened to the girl of my dreams.
* * * * *
In this one-of-a-kind novel, amateur investigator Ridley tests the limits of what a man will go through for true love. With the help of trained assassins and a stoner best friend, Ridley is thrown head-first into a dark world of drugs, kidnapping and violence. As a detective, he's not the best. Not even close. But Ridley is determined to find his girl -- or die trying.
* * * * *
Previously released in individual installments, this is the omnibus edition of the entire novel.
* * * * *
Praise for THE YEAR I DIED SEVEN TIMES:
..". another excellent title from Beetner"
--Dan Malmon, "Crimespree Magazine"
"A fast paced story with enough twists and turns to keep the reader engaged until the end."
--Brian Lindenmuth, Editor for "Spinetingler Magazine" and Snubnose Press
"This one is a blast. If you don't mind the occasional gore, creeps, sickos, and broken furniture, "The Year I Died Seven Times" is a really fun ride."
--Clare Toohey, "Criminal Element"