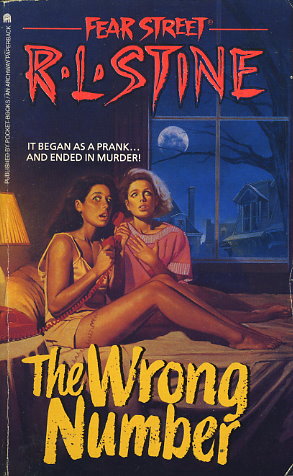 WELCOME TO FEAR STREET
Don't listen to the stories they tell you about Fear Street. Wouldn't you rather explore it yourself...and see if its dark terror and unexplained mysteries are true? You're not afraid, are you?

"Please come quickly…you're my only hope!"
It begins as an innocent prank, when Deena Martinson and her best friend Jade Smith make sexy phone calls to the boys from school. But Deena's half-brother Chuck catches them in the act and threatens to tell their parents, unless the girls let him in on the fun. Chuck begins making random calls, threatening anyone who answers. It's dangerous and exciting. They're even enjoying the publicity, and the uproar they've caused. Until Chuck calls a number on Fear Street.

To his horror, Chuck realizes he has called THE WRONG NUMBER. The jokes are over when murder is on the line. The murderer knows who they are and where they live -- and they have nowhere to call for help.