The Women of Eden — Marilyn Harris 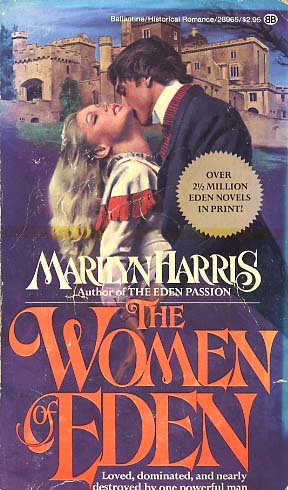 Sweeping from England's Devon coast to London, Cambridge, and finally America, this new volume in the Eden family saga is surely the best yet.

John Murrey Eden is the dominating force in the lives of the five Eden women. Lady Mary Eden, John's cousin, is the recipient of his greatest beneficence and the object of his deepest rage. Young and headstrong, Mary is stifled and eventually almost killed by John's zealous protection. When she falls in love with Burke Stanhope, a man John despises, battle lines are clearly drawn. Mary must decide if her love for Burke is stonger than her loyalty to the man who has single-handedly rescued her family from financial ruin.

Elizabeth Eden, the closest to a mother John has ever known and his staunchest supported, lives with Mary in her fashionable London home. As she watches John destroy the family she loves, even she is forced to choose a life independent of him.

Lady Lila Harrington Eden is John's charmingly free-spirited wife, whose suffering at John's behest is perhaps the most devastating of all.

Dowager Countess Harriet Eden, Mary's mother and John's aunt, lives in a self-inflicted world of darkness as penance for a sin so heinous that only she and John know of its nature.

And finally, Dhari, John's mistress, whose deep affection for John is replaced by an even stronger love for his solicitor, with catastrophic results.

From Mary's homosexual brother, who's lover dies unexpectedly, to the editor of the London Times, whose illustrious career is placed in jeopardy, John Murrey Eden makes his indelible mark on all the book's characters.

The Eden women's raging conflicts with John and their abiding love for one another provide the framework for this superbly written historical novel. As in This Other Eden, The Prince of Eden, and The Eden Passion, the reader is so caught up in the family's dramatic events that the book's ending comes all too soon.