The Winter of Her Discontent — Kathryn Miller Haines 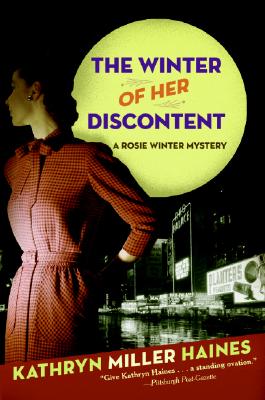 It's tough shooting for stardom when there's a war on. But Rosie's got enough pluck for two: she's willing to stumble around in a Broadway dance chorus that she has no right to be a part of, in a musical that's got "flop" written all over it. And all the while, she's worrying about her missing-in-action soldier boyfriend, who hasn't written in months. Lately, she's also been keeping bad company with her mob-muscle pal, Al, who's dabbling in a host of shady money-making enterprises in this time of shortages and rationing. But despite his illicit line of work, Al's no killer. When the cops finger him for his girlfriend's murder, Rosie and Jayne, her close compatriot/fellow castmate, set out to clear big Al's name, and plunge into an intricate backstage drama featuring a bevy of suspiciously well-dressed wannabe starlets. But the plot could soon be taking another lethal turn, bringing a final curtain down on Rosie, Jayne, and all their good intentions.
Reviews from Goodreads.com