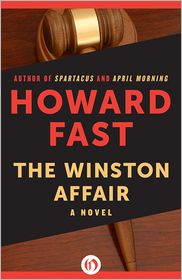 During the Second World War, a military lawyer is embroiled in the toughest case of his career when he must defend a fellow murderous officer

In the midst of World War II, Captain Barney Adams's superiors call on him with a very unusual request. A troubled US army lieutenant has confessed to murdering a British officer, and Captain Adams has been assigned as his defense attorney. Military court officials want the cleanest possible trial for the lieutenant, and they believe that Captain Adams, a war hero and distinguished lawyer, is the best man for the job. But when Adams begins to investigate the murder, he finds that this seemingly open-and-shut case is actually much more complicated. Before long he is absorbed in a dramatic struggle for a fair trial against the most overwhelming odds.

Thrilling and thought-provoking, The Winston Affair is a powerful portrait of a man torn between the wishes of his superiors and the call for justice.
Reviews from Goodreads.com