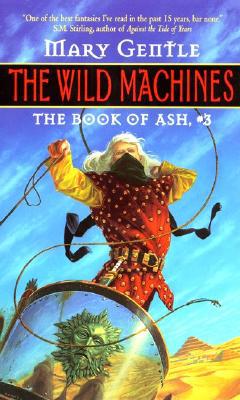 THERE IS MORE THAN ONE HISTORY OF THE WORLD

In an unremembered past of savagery, magic, and miracles, one figure blazed liked a fiery comet across the blood soaked fields of Europe and North Africa--a fierce combatant and brilliant strategist named Ash, unequalled in battle, who vanished into the mists of a history long forgotten, until now.

The armies of the Visigoth Empire have smashed the might of Europe, plunging the conquered lands into unnatural night. Only Burgundy fights on, battered but unbeaten, still warm in the embrace of the sun. It is the heart of the continent, supreme in culture and force f arms. But the beleaguered Duchy's ultimate fate lies in he hands of its rightful ruler, Duke Charles, trapped behind the walls of Dijon--a city under siege by the brutal soldiers of the Faris, Ash's dark twin. Like Ash, the Faris hears the words of the dread machinery that seeks the extermination of all humankind. Unlike Ash, she heeds them.

Fresh from the horrors of Carthage--and the apocalyptic seductions of the Wild Machines--Ash must decide whether to lead an army to near-certain doom, in an attempt to lift the siege of Dijon. For if the great city falls, and Charles dies, the sun will rise on the world no more...and humanity will descend into a darkness without end.
Reviews from Goodreads.com