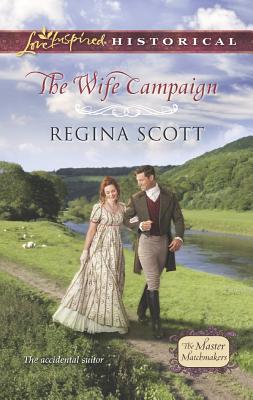 Whitfield Calder, Earl of Danning, would much rather spend a fortnight tending to his estate than entertaining three eligible young ladies. But when his valet insists that marriage is an earl's duty, Whit agrees to the house party. He has no intention of actually proposing to anyone…until flame-haired Ruby Hollingsford declares she'd never accept him anyway.

Ruby has been tricked into attending this charade, but she certainly won't compete for the earl's attentions. Yet, Whit isn't the selfish aristocrat she envisioned. And with a little trust, two weeks may prove ample time for an unlikely couple to fall headlong into love.

The Wife Campaign By Regina Scott
The Master Matchmakers Series Book 2
Whitfield Calder, Earl of Danning enjoys his time at his home by the river. His busy life does not allow him to visit here as often, a place where he can relax and fish. Unfortunately his valet has other plans for this fortnight, a house party. Not just a house party but he's invited three eligible woman and wants Whit to choose a wife!

Ruby Hollingsford cannot believe her father has tricked her into meeting yet another aristocrat. Doesn't he remember her painful past? At least there are two other women to keep the Earl's attention and she's made it plenty clear to him that she does not plan to marry. Unfortunately her heart seems to forget that she's just a jewelers daughter and Whit is an aristocrat.

The hired help are taking things into their own hands in this series. If their masters cannot see the need for a wife, well then they'll just give them the push they need. Once again the author brings in an assortment of characters. Those mother's of the young ladies are definitely the worst to deal with, but a simpering young woman batting her eyelashes can be annoying as well. An enjoyable story with a few twists and turns in the plot to add more excitement on that pathway to love. The first book is The Courting Campaign.
http://justjudysjumbles.blogspot.com/2012/10/regina-scott-book-list.html