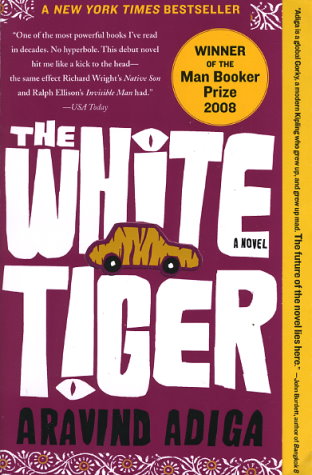 Balram Halwai is a complicated man. Servant. Philosopher. Entrepreneur. Murderer. Over the course of seven nights, Balram tells us the terrible and transfixing story of how he came to be a success in life -- having nothing but his own wits to help him along. And with a charisma as undeniable as it is unexpected, Balram teaches us that religion doesn't create virtue, and money doesn't solve every problem -- but decency can still be found in a corrupt world, and you can get what you want out of life if you eavesdrop on the right conversations.

Amoral, irreverent, deeply endearing, and utterly contemporary, this novel is an international sensation -- and a startling, provocative debut.

The White Tiger is the first novel by Indian author, Aravind Adiga. The narrative takes the form of a series of eight rambling emails sent over the period of a week from Balram Halwai aka Munna aka The White Tiger to Chinese Premier Wen Jiabao on the eve of his visit to India, and describes how Balram advanced from half-baked school boy son of a rickshaw puller to lowly teashop employee in Laxmangarh to chauffeur of rich Landlords in Delhi to fugitive wanted for the murder of his former employer to Bangalore entrepreneur. All this, under the guise of advising the Premier on producing much-needed entrepreneurs for China. Along the way, Balram comments on the divide in India between the rich and the poor, the powerful and the powerless, and details the bribery and corruption that are de rigeur in India. Adiga’s India is slums and sewage, shopping malls and traffic jams, call centres and cockroaches. As the main character, Balram is neither endearing nor wholly odious; in fact none of the characters will hold the reader’s interest for long. Some of Adiga’s descriptive prose is excellent, but this is not really enough to make this a “blazingly savage and brilliant” novel as described on the front cover. Winner of the Man Booker Prize for 2008, this is a pleasant enough read, at times blackly funny, but a far cry in quality from the works by those other Indian authors that won the Man Booker Prize in 1997 and 2006.