The Web of the Chozen — Jack L. Chalker 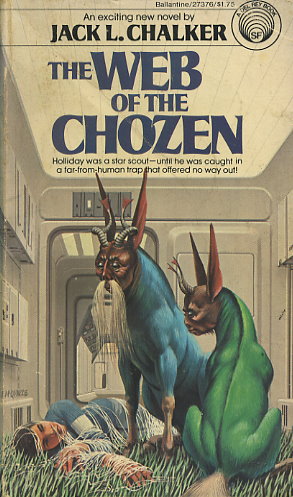 NOBODY BEATS BAR HOLLIDAY
He was paid to find Terraformable worlds, new planets for his corporation to plunder. Up until the day he came upon the Peace Victory, an abandoned generation ship hovering ominously above a definitely habitable planet, he believed nobody ever could.

NOBODY BEATS BAR HOLLIDAY
...because he was never satisfied with anything lower than first place, because he was always the oddball, in charge of his own welfare, his own destiny...a man determined to make his mark in the world and win all games at any cost.

NOBODY EVER BEATS BAR HOLLIDAY
...because he only took the wrong chances at the right times. But on the planet Patmos, where everything looked safe, but nothing was, Bar Holliday had at last met his match!
Reviews from Goodreads.com