The Web of Deception — Francesca Chimenti 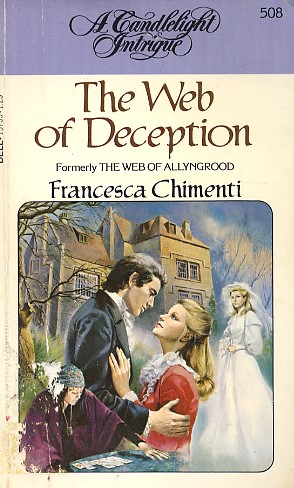 In straitlaced Victorian England, seventeen-year-old Gracey Neville had flouted convention, leaving her husband-to-be high and dry at the altar. But when a gypsy warned of a sinister trap awaiting her, even free-spirited Gracey had to shudder.

Allyngrood Abbey. Centuries old, it was where Gracey's stepfather sent her to escape scandal and be his spy in a household that obviously thought her mad.

But someone was trying to kill her. Even as the three brothers--stern Brigham, wild Murdoch, and gentle Nicholas--all proclaimed their love, the treacherous threads that held her life in peril threatened to ensnare her heart.
Reviews from Goodreads.com