The Wealth of the Islands — Isobel Chace 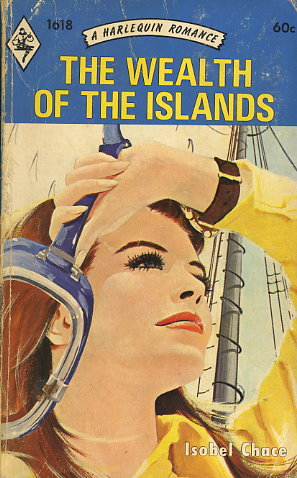 Helen Hastings had hardly been married when her husband Michael went out to the Pacific on a diving expedition and died there.

Curiosity about his death, and the feeling that she ought to help finish his work, made Helen go out there herself and join the expedition. But Gregory de Vaux, who was in charge of it, had other ideas...

Helen Hastings had only been married a very short while when she received the news of her husband Michael's death on a diving expedition in the Pacific. After the first shock and grief was over, Helen made up her mind to go out to the Melnga Islands to find out just how her husband had died.

She knew that she was one of the few people who could continue the work Michael had been doing and she was determined to join the expedition herself. At first its leader, Gregory de Vaux, would not hear of such a thing, but Helen was indispensable, and eventually he was forced to agree. But was Helen really solving any of her problems.