The Way to Babylon — Paul Kearney 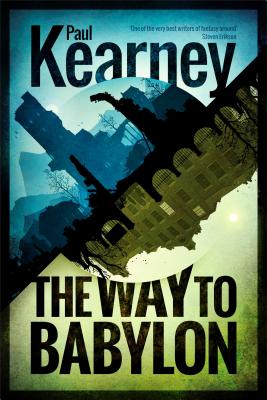 Broken, bereaved and happy to let his fans go without the next book in his bestselling series, fantasy author Michael Riven expects to go home to his isolated cabin and avoid people. But instead strangers seek him out and lead him on a journey away from this world and into Minginish, the imaginary place where his own novels were set, but which is more real than he can conceive - and in danger from legendary beats and unimagined terrors.

Michael Riven has fallen off a mountain. The bestselling fantasy author is broken in both body and mind, as the fall also claimed his wife and climbing partner Jenny. Readers are desperate to know what will happen next in the fantasy world Minginish, but neither writing, nor living, are of interest to the author as he lies in traction and his heart bleeds.

But there are others seeking the scribe out. Men--and someone who is not all human--have begun a quest to find a way to rescue their blighted homeland, and their road will take them between worlds. Michael Riven will return to his home in Scotland; he will accompany a stranger out into the hills and find himself led not over the local landscape but into a place altogether more familiar and terrifying: Minginish itself, a real place more surprising and unpredictable even than the world of his novels.

Beasts of myth and legend stalk a land where the seasons have gone awry. Michael must take up the companions of his stories--Bicker, Ratagan and Murtach--and find a way to mend the sundered world. If he can, he may even find that Jenny's existence did not end that day on the mountain.

The Way to Babylon was Paul Kearney's debut novel, and this is its first publication in North America.
Reviews from Goodreads.com