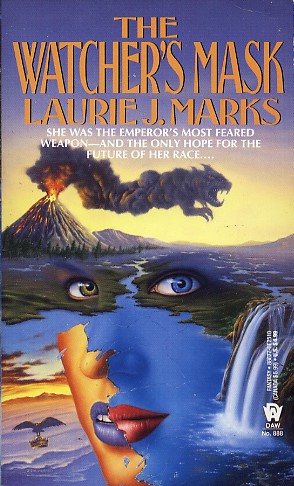 THE MANY-SOULED PEOPLE
had once been considered the wisest of all inhabitants of Callia, the island empire located, so legend said, on the back of the sleeping Dragon. These shamans, magicians, and seers--rare and powerful individuals, each gifted with several different personas had been the leaders of their tribes.

But the threat of war has now enabled an ambitious emperor to seize control, a man out to unite the tribes under his dictatorial rule, and for him the many-souled people are the means to this end. By kidnapping their young, brutalizing them, and indoctrinating them, he has turned them into the Separated Ones--feared and hated servants of the Empire.

Jamil the Watcher/Alasil the Executioner has been the most loyal of the emperor's minions, taking great pride' in her ability to destabilize local centers of power through both magical manipulations and violence. But as she begins to experience time "blackouts"--periods when neither of her personalities can account for the actions of her body, she fears she is succumbing to the madness which has destroyed others of her kind.
Little does she realize she is beginning a journey of self-awareness which will lead her to discover the true nature of her race, and in so doing, to overturn ` the destiny of her world....
Reviews from Goodreads.com