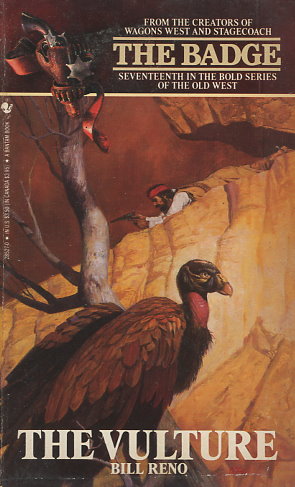 Share:
THE BADGE
To a violent land. a frontier yet untamed. came a man who wore a badge of law and order. He faced the myriad dangers and paid the price in blood to become one of the most enduring heroic figures of the Old West.

THE VULTURE
He is Victorio "the Vulture" Condor, the vicious bandito who has stained the Pecos red with blood. Yet no one has felt the full force of his brutality...until now. As vultures circle hungrily over the bodies of his dead brothers. Victorio declares war on the Texas Rangers -- and on Lieutenant Mark Gray, the man who strung them up. One by one, the Rangers will fall before his guns, but not the shrewd lieutenant: For Gray is a hard man to kill. and as hunter turns to hunted, Victorio will find he's an even harder man to escape.