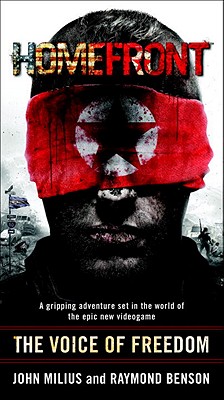 America may be reeling from endless recessions and crippling oil wars, but hack reporter Ben Walker never expected to see his homeland invaded and occupied by a reunified Korea -- now a formidable world power under Kim Jong-il's dictator son.

The enemy's massive cyberattack is followed by the detonation of an electromagnetic pulse that destroys technology across the United States. Communications, weapons, and defense systems are rendered useless; thousands perish as vehicles suddenly lose power and passenger jets plummet to the ground.

Fleeing the chaos of Los Angeles, Walker discovers that although America's military has been scattered, its fighting spirit remains. Walker joins the soldiers as they head east across the desert, battling Korean patrols -- and soon finds his own mission. Walker reinvents himself as the Voice of Freedom, broadcasting information and enemy positions to civilian Resistance cells via guerrilla radio.

But Walker's broadcasts have also reached the ears of the enemy. Korea dispatches its deadliest warrior to hunt the Voice of Freedom and crush the ever-growing Resistance before it can mount a new war for American liberty.