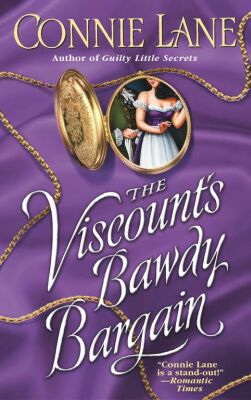 Share:
ALL HE WANTS IS TO WIN THE BET....
BUT WHAT IF THE PRIZE IS MORE THAN HE BARGAINED FOR?
There's nothing Nicholas Pryce, Viscount Somerton, and his friends like more than an outrageous wager. And there's nothing Wilhelmina Culpepper, daughter of an overbearing evangelist preacher, wants more than to get away from her father. When Wilhelmina becomes the unwitting victim of a jovial kidnapping caper by Nick & company, she decides to hatch a plan of her own -- one that causes her disgraced father to promptly disown her.

Nick soon realizes the trouble he's caused, and he offers to take Willie in, even make her his wife. But Willie, a true romantic, laughs off his proposal: after all, how could two people thrown together because of a prank ever really fall in love? But with nowhere else to turn, Willie volunteers to stay on as Nick's housekeeper...and soon their affection for each other becomes more than just a lark. Could it be that a little tomfoolery is just what it takes to make the perfect match?