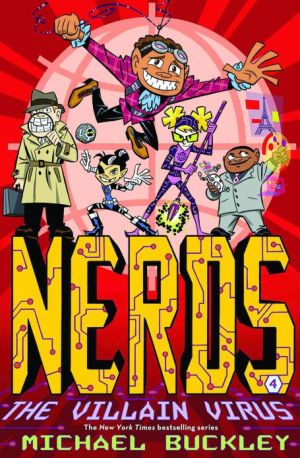 YOU'VE BEEN LOOKING A BIT SICKLY LATELY. HOPE YOU'RE FEELING BETTER THAN THE NERDS, BECAUSE SOMETHING NASTY'S GOING AROUND . . .

THE BACKGROUND
Supervillain (and former NERD) Heathcliff Hodges transformed himself into an all-powerful giant head, and now he's unconscious in the HQ basement, where he can't cause any more trouble ... right?

THE THREAT
Though Heathcliff's knocked out, the villain population skyrockets in just a few short days. Normal people get a cold and then suddenly develop insane alter egos and come up with elaborate plans to take over the world.

TEAM LEADERSHIP
Even the NERDS are vulnerable to the spread of villainy -- all except hyperactive Julio "Flinch" Escala. But he's never led the team before. Can he focus on more than his next candy bar ... and save the world?

YOUR MISSION
Being a spy isn't just about sitting around reading case files. See if you're physically fit enough to increase your security clearance. And if you suddenly feel the urge to change your name to Captain Crusher, don't try to take over the world. You're one of the good guys, remember?
Reviews from Goodreads.com