The Village on Horseback — Jesse Ball 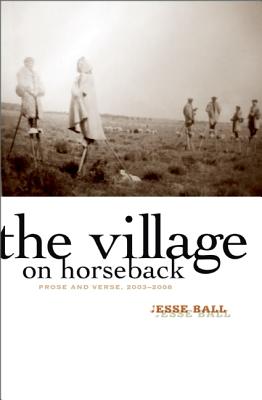 
This second volume of poetry by experimental writer Jesse Ball is a philosophical recasting of myth and legend. Employing an eerie narrative simplicity, these always unpredictable poems are cautionary tales of the oppressiveness of monolithic culture on the development of artistic, philosophical, and political leadership. Alternating from the personal to the public, Ball attains a wide enough vantage to observe the cowardliness of historians in their refusal to ascribe causality. Unearthing parables from the compost heap of oral tradition, folklore, literature, and popular culture, this book projects shadows of figures we think we recognize: Helen Keller, Pompeii, Ellis Island, Houdini, Lazarus, the Pied Piper, Punch and Judy, Hawthorne, Shirley Jackson, and more. Comprised of three separate volumes, The Village on Horseback creates an entirely original world of interrelated characters, with a mix of references, allusions, evocationsthe result being a sort of Brueghel-esque feeland yet there's also a self-conscious acknowledgment of modernity as well as a questioning of the authority of the author in determining meaning. At times evoking Gorey, Chaucer, and the tale of Robin Hood, these fables, ghost stories, and riddles of human nature dissect the individual's interaction with culture, particularly commenting on the ascribing of meaning by communal groups resulting in truth-making, and the limitations of our leaders (artists, philosophers, politicians) in their ability to break us out of communal indoctrination.