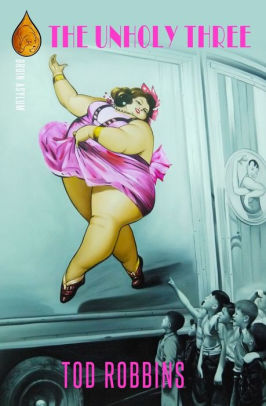 
Step right up, folks, and prepare to have your blood run cold as you meet the strangest, most bizarre trio of misfits ever spawned by a carnival of blood: TWEEDLEDEE, an adult man trapped in the body of a three-year-old toddler, whose mask of childlike innocence hides a seething brain plotting hideous revenge against all that is sane and normal! HERCULES, the circus strongman, brutal, bestial, revelling in carnage and murder – yet the submissive slave of a deadly dwarf! ECHO, the expert ventriloquist with the uncanny ability to throw his voice so that lifeless wooden dummies seem to speak even as you or I! Together, they are THE UNHOLY THREE, star attractions of Tod Robbins’ classic novel of hate, murder and madness on and off the midway. Best known as author of the story which inspired the still-controversial fear-film FREAKS, Robbins first stunned the public with this intense account of a ruthless war on society waged by a triad of carny castaways.