The Teachings of Don B. — Donald Barthelme 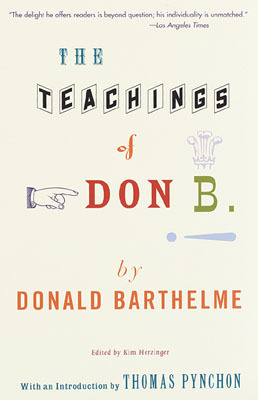 A hypothetical episode of Batman hilariously slowed down to soap-opera speed. A game of baseball as played by T.S. Eliot and Wilem "Big Ball" de Kooning.  A recipe suitable for feeding sixty park-enamored celebrants at one's daughter's wedding. An outlandishly illustrated account of a scientific quest for God. These astonishing tropes of the imagination could only have been generated by Donald Barthelme, who, until his death in 1989, more or less goosed American letters into taking a quantum leap. Now sixty-three of Barthelme's rare or previously uncollected shorter works--including satires and fables, plays for stage and radio, and collages--have been assembled in a single volume. Gleeful, melancholy, erudite, and wonderfully subversive, The Teachings of Don B. is a literary testament cum time bomb, with the power to blast any reader into an altered state of consciousness.

"Barthelme happens to be one of a handful of American authors, there to make the rest of us look bad, who know instinctively how to stash the merchandise, bamboozle the inspectors, and smuggle their nocturnal contraband right on past the checkpoints of daylight 'reality.'"--Thomas Pynchon, from the Introduction
Reviews from Goodreads.com