The Super-Rich Shall Inherit the Earth: The New Global Oligarachs and How They're Taking Over our World — Stephen Armstrong 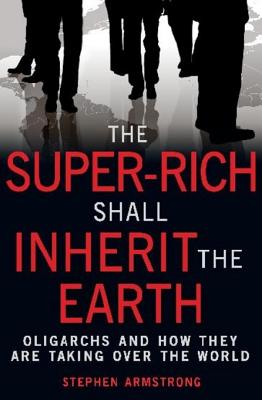 Share:
In 2000 No Logo described a vision of rapacious corporations building brands at the expense of impoverished third world employees and ripped-off first world consumers. Now, only eight years later, No Logo looks almost optimistic against the rise of a new and insidious club of global billionaires who are buying up once unfashionable industries like oil, steel, shipping and mining from distressed third-world nations and formerly Communist powers. Often backed by mafia money or dubious political connections, these oligarchs have no shareholders and no home nation - they are the sum total of their corporations. We are dependent on these men - they fuelled our recent boom. They come to us for our light taxation and our willingness to sell them class and influence via an Eton education for their kids and cheaply bought honours. These men are becoming ever richer as the rest of the world suffers credit crunch and recession. They deal in the commodities that the planet's economies need but which are becoming ever more scarce. There are no national governments that can control or legislate against them - they will simply move to another of their five or six palatial homes. In this recession, we are all acutely aware of our dwindling wealth and the spiralling prices of essentials. The fact that these are in fewer and nastier hands than ever before has rarely - if ever - been explained by the media. It's time for a book that points out the power of these individuals and how they are just the start of a deeply worrying trend. The buyers of Tescopoly and No Logo have long been aware of overly powerful corporations. The rise of men whose personal wealth and power far outranks most of the companies in these books should alarm these concerned citizens - and encourage them to find out more. This book will paint a vivid picture using interviews, first hand experience, expert comment and some futurology to give them the information they need.