The Struggle For Sicily: The End of the Beginning — D.A. Aubrey 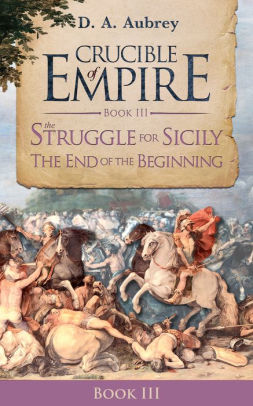 Denied a decisive victory by Rome’s defensive tactics, Pyrrhus despatches Hieron to conclude an alliance with Syracuse and its allied Greek cities. Having landed his army in Sicily, Pyrrhus moves against Syracuse’s northern enemy, the rogue City of Messana, thereby threatening Himalgo’s intrigues.

Meanwhile, appointed to command in Syracuse, Hieron is ordered to confront an insurgent slave army. Outnumbered, he relies upon the novel tactics advocated by his new subordinate, Creon.

Aided by the voluptuous Actia, Hieron struggles to master the murky undercurrents of Syracusan politics. But Actia’s decision to befriend Tansia proves disastrous. With Messana chastened, Pyrrhus turns to face the Carthaginians.