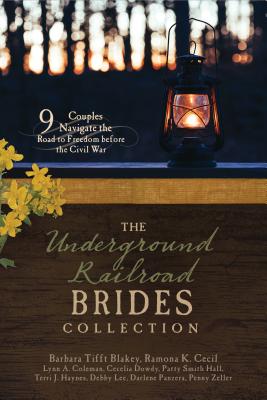 Share:
Love Guides Hearts Along the Road to Freedom

Nine historical couples walk the road to love even as they dare to escape and help others break free from the injustices of slavery between 1849 and 1860. From Southern states of Georgia and South Carolina to above the Mason-Dixon Line in Indiana and Pennsylvania, they work within the network known as the Underground Railroad.

There is hope for the future when people come together to fight evil, and when men and women find love in the midst of great challenges. And through it all, faith is the key to victory in these stories from nine inspiring Christian authors.

Emma Underground by Barbara Tifft Blakey
Schenectady, New York -- 1851
Emma Trebor desires to reconcile with her husband, but he is hiding something from her. How could she know the investigator she hires is secretly a bounty hunter and her husband is his target?

Follow the Christmas Star by Ramona K. Cecil
Madison, Indiana -- 1850
Deeply involved in the abolitionist movement, Edith Applegate struggles to reconcile her desire to help bring people out of bondage and her growing affection for a former Southern slave owner.

Under the Sails of Love by Lynn A. Coleman
Savannah, Georgia -- 1860
Charlotte Kimbrel, a Southern Belle, has been smuggling slaves. Captain Zachery Browne's ship sails slaves to freedom. Hostilities between the states are developing. Will Charlotte successfully travel the Underground Railroad by sea?

The Bakery Bride by Cecelia Dowdy
Philadelphia, Pennsylvania -- 1859
Grieving over her beau's unjustified death, Ruth -- a recently manumitted slave who is illiterate -- assists her upper-class boss as an abolitionist. Can she heal from the pain of slavery and learn to love again?

Place of Refuge by Patty Smith Hall
Abbeville, South Carolina -- 1857
Underground conductor Hudson Wallace is surprised when Jorgine Emerson asks him to transport her slaves to freedom, but is it a trap? Can Jorgine's deep conviction win Hudson over?

Free to Love by Terri J. Haynes
East Towson, Maryland -- 1850
Winnie is hiding a secret -- Hiram, a fugitive. Their lives cross at an Underground Railroad station. Can they overcome danger and find freedom in love?

The Winter Quilt by Debby Lee
Newport, Indiana -- 1840
Relocated to an unfamiliar town, Coral Martin yearns for stability. Carpenter Josiah Williamson helps her find meaning working on the Underground Railroad. Will their love survive when forces threaten to tear them apart forever?

The Song of Hearts Set Free by Darlene Panzera
Jersey City, New Jersey -- 1851
Budding abolitionist, Annie Morrison, discovers the man she's fallen in love with may be a slave catcher in disguise.

Freedom's Flight by Penny Zeller
Tennessee -- 1850s
When she discovers the handsome Reverend Matthias Sorenson assisting runaway slaves, can Annalise Van Houten convince him to allow her to help? Or will mistrust prove fatal for all involved?