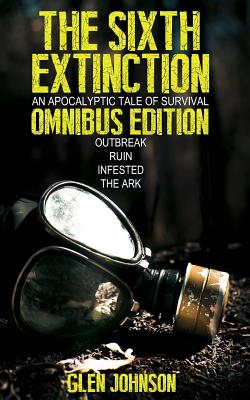 Mankind is no longer at the top of the food chain. The Sixth Extinction is an apocalyptic tale about a pandemic that sweeps the globe, decimating the human race, leaving humanity struggling to survive. Within three weeks everything has changed. Social structure has collapsed. The police are non-existent, and the army concentrates on the cities. Gangs of yobs rule the streets. It becomes everyone for themselves. The story follows three main characters, Noah, Red and Doctor Melanie Lazaro, as well as Betty and her simpleminded grandson, and a Squad of military personnel. It follows all their journeys of self-discovery through the changing world. Noah Morgan is just an average twenty-one-year-old. He has no aspirations in life, no girlfriend, few friends, and a dead-end job. Red is a nineteen-year-old female runaway, with a sad past and a disturbing secret. Together they leave behind everything they have ever known, looking for a safe haven. Betty and her grandson Lennie are just trying to stay alive, and find somewhere safe to hide while they try to make sense of all the madness around them. The Squad is a small group of military personnel who are trying to get back to the safety of their large base – a base that holds a secret. Doctor Melanie Lazaro is working around the clock, under military supervision, in Exeter University’s Biomedical Sciences Department, trying to create a cure for the new pandemic that is turning humans back to their primordial roots, creating mindless killing machines with only one purpose − to eat. The four-part series is a fast-paced story, all set within a twenty-four-hour time-frame.
Reviews from Goodreads.com