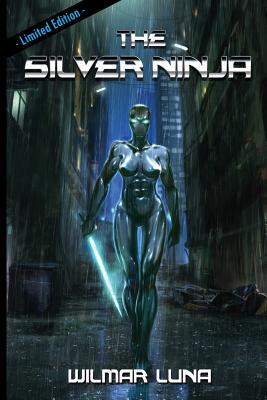 Back in 2012 I wrote and published the first book of The Silver Ninja prototype series. At the time, I had no idea I would consider rebooting the entire series from scratch. Both the 2012 and 2014 editions of The Silver Ninja were critical and commercial flops. The reviews trashed the books and rightfully so, I didn't know what I was doing. But believe it or not, some readers liked the books. And an even smaller group e-mailed me to say how much they loved the original series. One man's trash is another man's treasure I suppose. I would prefer you read A Bitter Winter but I won't stop you from reading these older titles. Please note the e-books are available for free at other retailers. WHAT IS THE SILVER NINJA 2012 ABOUT? *Deep breath* Where to start with this. All right, so Cindy Ames gets mugged and left for dead. This pisses her off so much that she becomes a whiny little nitwit and eventually gets a super suit. Once she has a super suit, she goes full-on villain and starts massacring the crap out of people. The prose is flowery, the plot is full of holes, the characters are 2 dimensional, and Cindy is annoying as heck. But the action is fun, the action is always fun. Are you sure you don't want to read A Bitter Winter instead? It's so much better. Continue at your own risk. (Remember, free in e-book format.)
Reviews from Goodreads.com