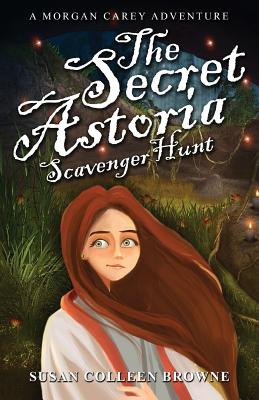 The Goonies Anniversary Celebration brings Seattle tween Morgan to Astoria, Oregon, for a fun weekend with her younger Astoria cousins, Sean and Ronan. The Anniversary festivities are in full swing at this historic riverfront town, plus the boys have just entered a spooky contest inspired by the movie. When the boys ask Morgan to help them win the grand prize, she’s determined to make their Anniversary Celebration weekend together the most memorable ever! But there’s something really peculiar about the bed-and-breakfast where Morgan, almost thirteen, and her mom are staying. When an even more outlandish girl at the B&B asks the three to go on a cryptic quest on her behalf—a scavenger hunt that could help the boys win the contest—Morgan and her cousins begin a rollicking visit to Astoria’s most famous spots. Yet as the weird hunt kicks into high gear, they discover a mysterious boy is following them all over town. With the stranger in hot pursuit, the kids realize that the secrets and legends of old Astoria may be haunting them. Will Morgan, Sean and Ronan be able to escape from the powerful forces of the past? Or will they remain trapped in a world of shadows and dangerous secrets?
Reviews from Goodreads.com