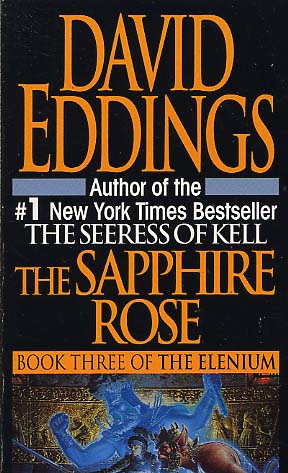 Finally the knight Sparhawk had come to possess Bhelliom, legendary jewel of magic that alone could save Queen Ehlana from the deadly poison that had felled her father. Sparhawk and Sephrenia, ageless instructor in Styric magics, made haste to free Ehlana from the crystalline cocoon that had preserved her life while they desperately sought a cure.

But Bhelliom carried dangers of its own. Once the stone came into his hands, Sparhawk found himself stalked by a dark, lurking menace. Whether the foul Zemoch God Azash was behind this threat, or some other enemy, even Sephrenia could not say --only that the sapphire rose held powers too dangerous for any mortal to bear.

Restoring Queen Ehlana would be only the beginning of Sparhawk's mission. With the aid of four stalwart knights, one from each Militant Order, he must thwart Ehlana's poisoner, the Primate Annias, in his plot to assume the throne of the Church. For as Archprelate, Annias would serve his secret master, Azash, and deliver up to the dread God the one thing Azash thirsted for --Bhelliom itself!