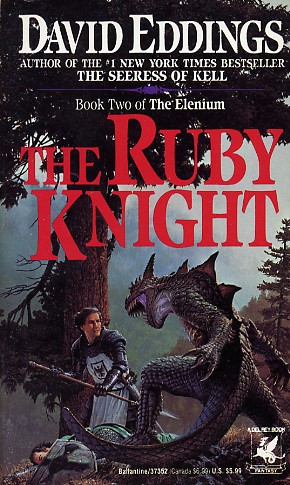 Ehlana, Queen of Elenia, had been poisoned. A deep enchantment sustained her life, but only while the Knights aiding it still lived -- and already they were dying, one each month.

Then Sparhawk, Knight and Queen's Champion, learned that the cure for the poison was the Bhelliom, the great jewel lost when Sarak of Thalesia had died in battle, five hundred years before.

Sparhawk and his companions set forth to find King Sarak's grave by raising ghosts of those who had perished in that ancient battle. The Seeker, an insectile monster spawned of the evil God Azash, hounded their every step. Still Sparhawk pressed on, driven by desperate need. They had to find Bhelliom before his queen could perish. They must not fail!
Reviews from Goodreads.com