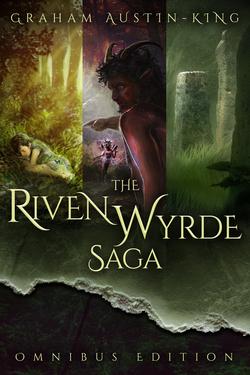 Every myth has its source, every fable has its root.

The fae were banished, locked away until the tales of them passed into myth and folklore. Now the ancient barriers are failing and vengeance may be within their grasp.

Klöss, wants nothing more than to pass the trials and join the ranks of the Bjornmen raiders, following in the footsteps of his father and uncle. But times are changing in the Barren Isles, coastal plunder is making way for outright conquest, and the threat of war is looming.

Devin, an orphan boy with a strange past, watches his sleepy village transformed as defences are erected to repel the foreign invaders. But there are worse things than Bjornmen. Whispered rumours tell of creatures in the moonlight, shadowy figures with eyes of amber flame.

Download this Special Edition Omnibus edition to experience epic battles, the politics and scheming of two worlds, and a race as alien as they are familiar.

"Graham Austin-King puts the bite back into the world of fairy tales." - S.H. Mansouri, Grimdark Magazine.

Includes all three novels of the Riven Wyrde Saga