The Risk of Heaven — Bob Berger 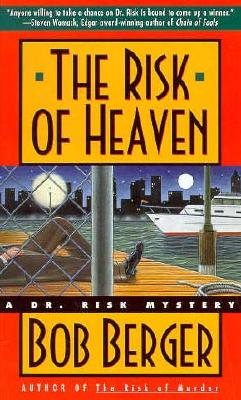 When Dr. Risk wakes up alone on a dock on the East River, he's got more than a bad hangover -- he's got a problem.  He can remember a party the night before on a yacht with his old friend Bill Golden, but nothing else.  He takes a cab home, groggy and confused, only to find a swarm of police and reporters waiting outside his apartment door.

Before he can guess the odds of his being arrested for an imaginary crime (slim to none), he's handcuffed and dragged down to the station, charged with molesting Missi Golden, the young daughter of his old friend.  Is his absence of memory a mere convenience or is this a cruel hoax?

Risk has to convince everyone that he's innocent, including himself, and the odds are stacked heavily against him.  But Risk knows numbers better than anyone, and before long he finds himself digging through the past of a murdered Russian immigrant and downloading records of shady real estate deals which seem to bear the name of Bill Golden quite regularly.

Risk races to save himself and to find out who might be behind a world-class cover-up in this fast-paced, number-crunching mystery.
Reviews from Goodreads.com