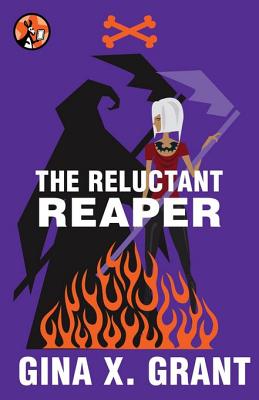 Share:
Kirsty d'Arc is enjoying life, until someone she trusts hijacks her soul in this first installment of The Reluctant Reaper series. To escape Hell's inferno and gain revenge, Kirsty must partner with the very Reaper who scythed her -- the hunky dead poet Dante Alighieri.

Life for Kirsty d'Arc might not be perfect, but it's far from hellish. She likes her job, has a great BFF, and truly admires Conrad, her boss. But when she dives in front of a lunatic's blade to save him from certain death, she finds out Conrad isn't so admirable after all. In fact, he's traded her soul to the Devil!

While her body lies comatose on the Mortal Coil, Kirsty's spirit is dragged straight to Hell…which is not quite the fire-and-brimstone abyss she'd expected. In fact, the place is quirky, wacky, and not without charm. Desperate to reunite body and soul before her time runs out, she seeks out allies, earning the friendship of a powerful drag demon, a psychic server, and, most importantly, Hell's civil servant. But what of her growing attraction to Dante, the sexy Reaper with a flair for romantic language -- can she forgive him for scything her soul?

Stuck in the netherworld, Kirsty vows she'll do everything on her postmortem bucket list, starting with getting her life back and ensuring that Conrad has Hell to pay!