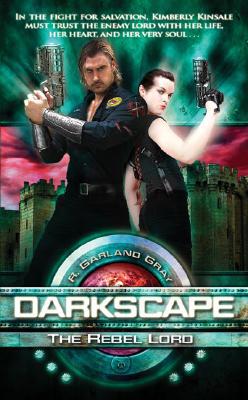 
Lord Lachlan de Douglas, a noble warrior lord, is heir to a Clan of Ancient Earth. Bold, rebellious, possessing strength and passion, he defends his clan from annihilation against a wretched war of masked vengeance and treacherous shadows. Until one day, a sudden horror alters his being, condemning him to a world of private anguish and torment.

Kimberly Kinsale, a diplomat's daughter, is a rare beauty motivated by honesty and integrity. Serving as a lieutenant in an elite combat fighter group aboard a war ship, she governs her life by the intrigue and lies of her commanding officer. A moment of lunacy and folly, a secret revealed, and Kimberly stumbles upon an unspeakable deception.

Now she must decide. Maintain her loyalty, or betray her clan and ship for a Douglas enemy lord who can prove the truth - never knowing the battle for justice would take her through Lachlan's nightmare, a rage so deep, a suffering grounded in shame and pride, even when peace shone in sight.

For theirs is an unexpected passion, born in the fires of a shared need and desperate struggle. And as time slowly runs out - even an exquisite love may not be enough for salvation. To save Lachlan, Kimberly will fight the sinister legacy of the matrix robots and trust the handsome enemy lord with her life, her heart and her very soul.