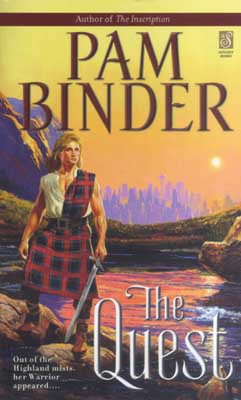 Pam Binder evoked the romance of an ancient Highland legend in her unforgettable debut novel. The Inscription. Now she returns to that magical setting to weave a charming and mystical tale of a love unbounded by time.

Scotland, 1328: Conjuring with all of her will. Ana de Dannon summons the greatest champion of the ages. Cuchulainn, the legendary Irish warrior. Only he could defeat Ana's evil half-brother. Roderick. and free her mother. Rhiannon, from Edinburgh Tower. In a perversely generous gesture--as he knows no man in the land will face him--Roderick has offered to release any prisoner whose champion can defeat him in a tournament.

But the powerful man Ana conjures is not Cuchulainn, though the word Warrior is written on his strange and colorful garment... and his face is hidden beneath a massive helmet. Ana has mistakenly called forth Kenneth MacKinnon. quarterback for the Seattle Warriors, and the greatest champion of his age--the year 2000. But he may be the hero she needs after all, when he learns to do battle for something greater than his own glory--the love of a fair maiden.
Reviews from Goodreads.com